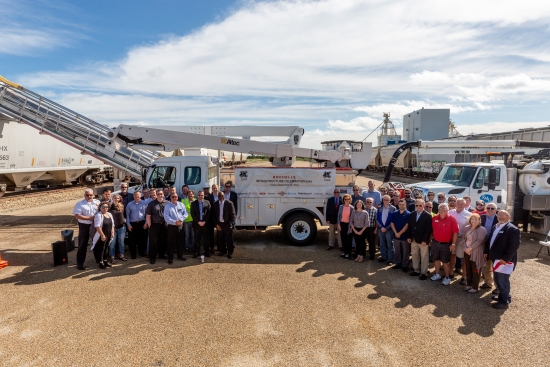 Today officials from Washington DC, Chicago, and Springfield assembled for an event promoted as Rochelle’s Infrastructure Celebration Day. The event was held to commemorate the more than dozen infrastructure projects that the City is building to attract new businesses and industries. (See attached list of projects). While acknowledging the more than $50 Million investment the City has put into these projects, Mayor John Bearrows said “This investment is what secures the City’s future, as we are among a small number of communities that can say they are truly “Open for Business” because we have what companies need and want to build and expand”.

Some of the major projects that support the Mayor’s charge is the $7Million upgrade to the wastewater treatment plant and the more than $15 Million spent on improving a number of wells and water mains to increase Rochelle’s water supply. City Manager Jeff Fiegenschuh emphasized what it takes to build the kind of infrastructure necessary to grow a community. “It is all about teamwork and partnerships that lead to results”. One of the partners Fiegenschuh referred to is the Economic Development Administration (EDA) who was represented at today’s celebration by Dennis Foldenauer, Chicago Regional Office Area Director, who said “The EDA has been pleased to partner with rural communities like Rochelle in helping to build infrastructure, that has resulted in the creation of hundreds of good paying jobs and millions of dollars in private investment”.

As part of the day’s events the City also held a Grand Opening of the new Rochelle Transload Center (RTC) and City of Rochelle Railroad expansion. This project opens rail access to hundreds of industries across the Midwest looking for options to ship or receive raw materials, finished products, equipment, bulk materials or any product that could move by rail. The regional impact of the RTC was noted today by Michael P. Dunn Jr., Executive Director of the Rockford Metropolitan Agency for Planning (RMAP) when he said, “The investment Rochelle has made in their new Rail Transload Center and expansion of the City of Rochelle Railroad, directly benefits communities throughout Northern Illinois, and we are thrilled to be a stakeholder in their success”.

In addition to the new Rail Transload Center the Rochelle Railroad now has a new four-track rail bridge which according to Jason Anderson, the City’s Economic Development Director “opens up a number of new opportunities to expand our rail services to industries both near and far”. The combined rail projects were funded by the EDA ($3.42M), the Illinois Department of Transportation ($2.58M) and the City of Rochelle ($1M).

As part of Rochelle’s Infrastructure Celebration Day, the Illinois Chamber of Commerce presented the Friend of Infrastructure Award from the Transportation for Illinois Coalition to State Representative Tom Demmer for his support of the state’s new $45 billion capital construction program. Since taking office, Representative Demmer has been an advocate for expanding infrastructure across northern Illinois, creating hundreds of jobs and millions of dollars in new revenue.

Maintaining a competitive business climate is our goal, we will work hard to meet your needs - you'll find unique support, call us we'd love to connect with you.