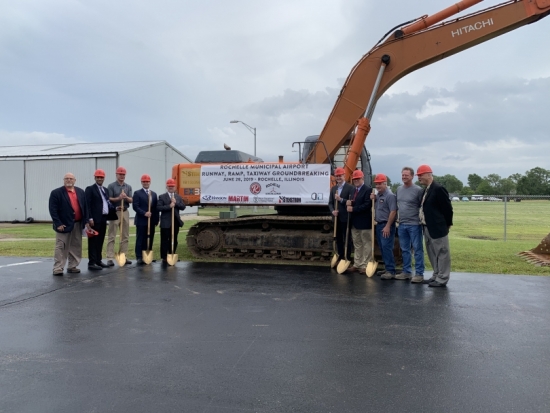 Today the City of Rochelle broke ground on a number of major reconstruction projects to the Rochelle Municipal Airport at Koritz Field. The multi-phased project includes the resurfacing of a taxiway, replacement of ½ of the airport ramp, construction of a taxiway that will provide a new access point to the runway, replacement of the electronics that operate the runway LED lighting system and a resurfacing of nearly 1 mile of Runway 7/25.

Mayor John Bearrows said in a statement released today, “Our airport is a significant piece of the City’s infrastructure that helps us to attract new businesses and industries to Rochelle”

The price tag for the combination of projects is $3.2M and is being funded by the FAA, Illinois Department of Transportation – Division of Aeronautics and the City of Rochelle.

Jeff Fiegenschuh, Rochelle City Manager said, “The FAA and IDOT have been great partners with the City in helping to expand our vision for the Rochelle Municipal Airport”.

Over the past decade, more than $6M has been invested in building a 12,000 sq.ft. community hangar, 800 ft. runway extension and the construction of a new taxiway as part of a comprehensive plan to upgrade the infrastructure at the airport.

Mike Hudetz, the Airport’s Manager said during today’s groundbreaking event, “When we complete these projects our facility will look and feel like a brand-new airport”.

According to data collected on landings and takeoffs, over 15,000 operations occur annually, which is a 500% increase in operations since 2014. All of the projects are expected to be complete by the end of the year.It was also announced during today’s press briefing that the Rochelle Municipal Airport at Koritz Field was recently named “2019 General Aviation Airport of the Year” by the Illinois Department of Transportation – Division of Aeronautics. Jason Anderson, the City’s Director for Economic Development and Airport Operations responded to the announcement saying “We are very proud to be the recipient of IDOT’s 2019 Airport of the Year Award. We want to thank Mike Hudetz, our Airport Manager, for his tireless efforts to make the airport a safe, efficient and attractive destination”. This is the second time over the past five years the City of Rochelle has received this award.

Maintaining a competitive business climate is our goal, we will work hard to meet your needs - you'll find unique support, call us we'd love to connect with you.